We’ve finally arrived at the festive season of the year, which means all of the Christmas movies one could ever ask for! Every year, I’m determined to watch all of the Hallmark movies and never manage to do it, however, with the current situation leaving us with not a lot to do, I have more time in the world than ever before. I’m taking it up a notch this year and trying to not only watch all of the Hallmark movies, but I have also grown fond of Lifetime movies recently as well, so why not try get through them all!? So far, I’m all up to date, therefore I thought I would share my recommendations/reviews with you all, in case anybody is is need of some new Christmas movies to watch! 🙂

A former figure skater and a former hockey player work together to void the mayor from closing the local skating rink.

Oh my goodness, this one didn’t half tug on my heart-strings! Courtney and Noah’s chemistry was known from their very first meeting – not only that, Courtney and Noah’s daughter, Grace, hit it off immediately during their ice-skating lessons. The three were absolutely meant to meet and have their seconds chances with one another. I absolutely adored the connection between the town’s Mayor, Noah and the ice-skating rink – it was a heart-touching story-line, that brought tears to my eyes. Courtney was an absolute gift to these characters and lit up their eyes and Christmas once more. Absolutely my favourite watch this year, so far.

A wedding planner ends up in a remote Alaskan town and falls in love with its Christmas pageantry, as well as the local man helping her find a rare flower. 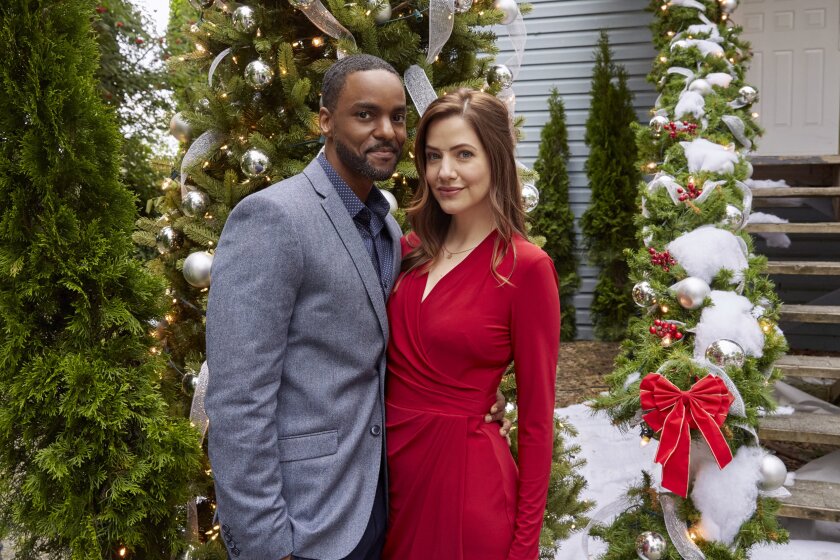 Oh how exciting it is to be in the festive season, kicking it off with this absolute delight from Hallmark – Jessica is a successful wedding planner and this Christmas, she has her biggest event to plan and one bride in need of a rare flower. Lucky for the bride, Jessica is determined to give her the flowers she absolutely dreams of walking down the aisle with, thanks to it’s sentimentality.  The small – and when I say small, I mean small – remote town in Alaska that Jessica travels to was really lovely and the community amongst it were so close-knit, opening their arms to our leading lady immediately. Including the handsome local, Matt, who takes an instant shine towards Jessica, as she does with him. Both actors were absolutely wonderful in this individually, giving us all of the feels with their characters and the connection between one another was well done, despite how little they have known one another. It just shows that you don’t need to know someone for a long length of time to know what you truly want in life!

Cynical reporter Charity gets the opportunity of a lifetime when her boss, assigns her to profile Erik Gallagher, a handsome bachelor who organizes millions of dollars to help the less fortunate every Christmas.

Really, I could just tell you all to watch this because of Amber Stevens West, what an absolute infectious actress she is! She exudes such a laid-back, edgy vibe within herself and her character of Charity, allowing you to immediately warm up to her. However, there’s one thing about Charity Jones that needs a little sparkle – her Christmas spirit! As a blogger and journalist, she only believes in the true facts of life, so when she meets Erik Gallagher, a man who believes in Christmas magic and somehow manages to give families millions of dollars worth of presents each year from the help of Kris Kringle himself, she is determined to get to the bottom of how he truly does it all. The hard facts that he refuses to speak. I absolutely loved gradually watching the sparkle in Charity’s eyes light up just that little bit more, as she grew to believe in the Christmas magic herself, no longer worried about getting the truth, but capturing the joy that she has come to feel. Sometimes it’s nice to not know the facts and statistics behind everything. Sometimes it’s just nice to feel the magic and allow it to make all of your wishes come true.

World famous pianist Margot returns to Chateau Neuhaus for Christmas. While there she reunites with her ex-boyfriend Jackson, who convinces her to headline their annual Christmas Concert.

Chateau Christmas was a heart-warming, musical movie filled with loving reunions, between our leading female and male, along with a band that haven’t been in contact with one another for twenty years. With only a super short amount of time to plan a concert, Jackson and Margot come together to create something spectacular, whilst also spending time to get to know each other again. Despite the way their relationship ended the first time round, Jackson doesn’t hold a grudge against Margot, only winding her up a few times. He is incredibly supportive of the career she has created for herself and encouraged her to perform in the concert herself, allowing her to fall in love with music again for herself and not for the public. Margot was a loveable character and it helps that I absolutely love the actress playing her. Finally having the spare time to spend with her family, Margot is determined to brush off the bad review she was given for her most recent performance and although she had all the intentions of relaxing for herself, she wasn’t about to say no to helping her first true love with an event that could also change his life.