Sixteen-year-old Mila lives in LA with her mom and A-list actor dad, whose fame constantly thrusts their lives into the media spotlight. But when Mila’s antics around town make waves ahead of her dad’s next big movie, something needs to be done. So Mila is dispatched 2,000 miles away to Nashville, Tennessee, where she can cool off for the summer with her aunt and grandfather. The perfect solution – right?

Mila’s not so sure. She’s dreading the idea of a summer away from her friends, not to mention being shipped to the other side of the country. Apprehensive and out-of-sorts when she arrives, it doesn’t take long for her to get off on the wrong foot with the mayor’s son, Blake. In spectacular style.

But Blake’s no stranger to Mila’s issues. He knows exactly what life’s like with a parent in the public eye – the pressures and politics, dramas and dynamics … Perhaps Mila and Blake have far more in common than either of them care to admit.

Becoming Mila is the first book in Estelle’s brand new trilogy and what an opening she has treated us to! Mila Harding is sent to Nashville for the Summer, after an incident threatens her father’s upcoming movie release. Whilst it would appear to be any sixteen-year-old’s dream to be in the spotlight, living it up in Los Angeles, Mila adapts to her Nashville roots quite quickly, as she reconnects with family members and old friends. Much to Mila’s surprise, she is also about to become involved in an unexpected whirlwind of a romance with the charming and sort of arrogant, Blake.

What made this book extremely interesting, was getting to understand all that came with being the daughter to a famous actor. The pressures that come with it, the rules you have to abide to and the control that people have on your life to be your most perfect self. Returning to Nashville was Mila’s second chance at making a name for herself, where she wasn’t in the shadows of her father and his career. Despite Mila and Blake’s rocky start, their connection really began to spark when Mila discovers that he is the Mayor’s son and faces a lot of negative press himself. Meeting somebody in the same predicament as herself, the two form a bond just between the two of them, allowing Mila a care-free and fun Summer.

Whilst this starts off as a light-hearted and summery read, there is so much more depth woven within that shakes Mila and the readers to the core. What was supposed to be a simple Summer of staying under the radar, becomes a Summer of discovering family secrets and betrayal. Mila’s parents aren’t who she had always thought they were, especially her father and Mila is beginning to see him in a whole new perspective. I absolutely adored Mila’s character development throughout this book, as she goes from wishing away the Summer so she can return to her friends in LA, to refusing to go back to LA and finding her community within Nashville. The growing bond she forms with her Aunty and Popeye are too precious for Mila to leave behind and it’s clear to see that she has found herself and her true family right where she is. There were so many moments between Mila, her Aunty and Popeye that were just the most adorable scenes ever, but one in particular is when Mila and her Popeye are dancing together in the living room, having some one on one time. It was such a beautiful moment and really encapsulated how important it is to keep family connections solid, as you just never know what life has in store. There was also some extremely intense, goose bump moments between Mila and Blake – heads up, the pool scene!!!

Becoming Mila is the perfect read to pick up this Summer; filled with character growth, family reunions, forgotten friendships, romance, betrayal, complex families and the most wonderful additional characters. The book ends with one whopping cliff-hanger and I am so so glad that we don’t have too long to wait until book 2 because, aah! I can’t wait to see what’s in store for Mila next after that heart-stopping news and also, what is in store for Mila and Blake’s blossoming romance. It’s all so exciting and Estelle truly never disappoints! 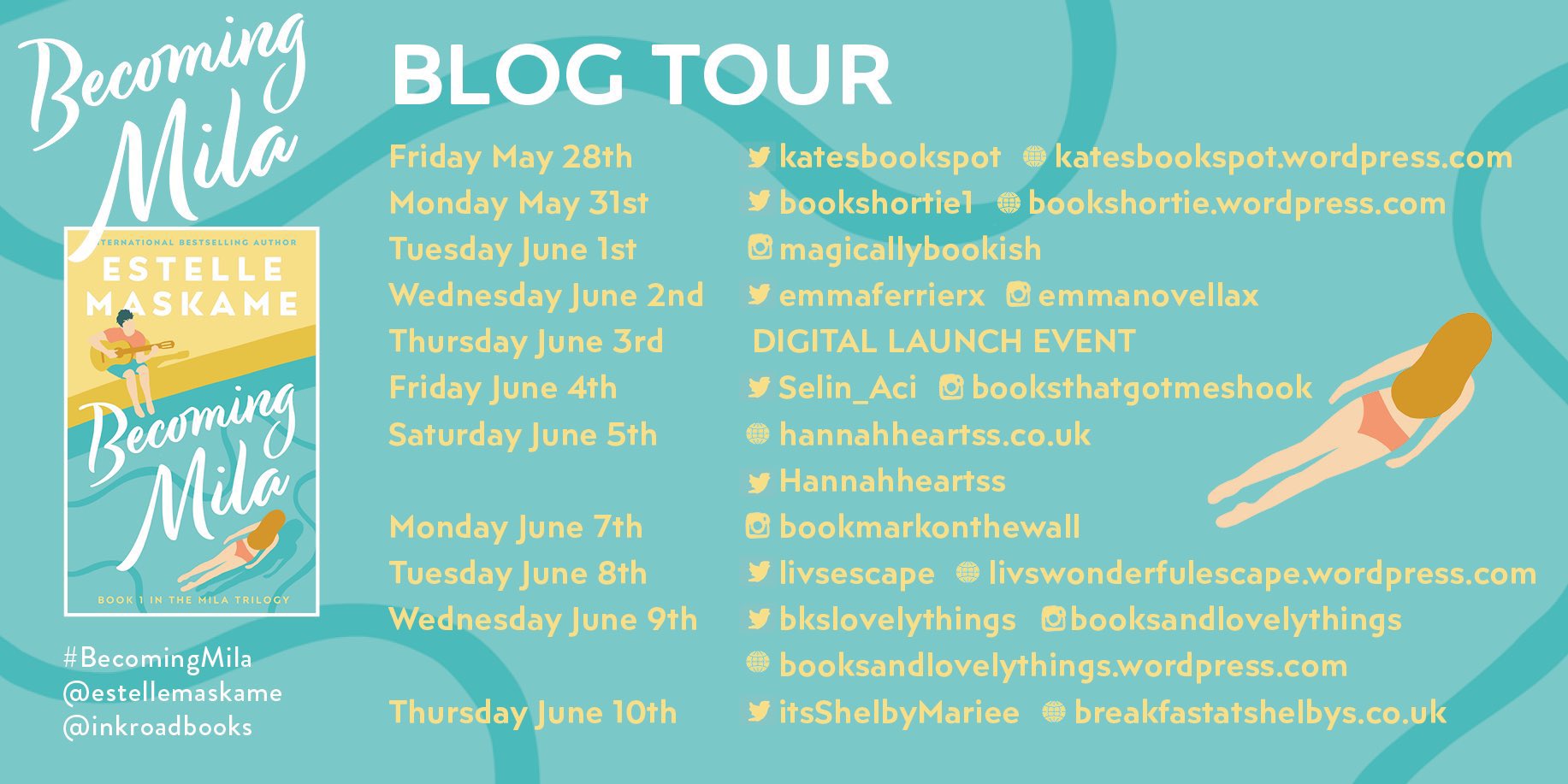